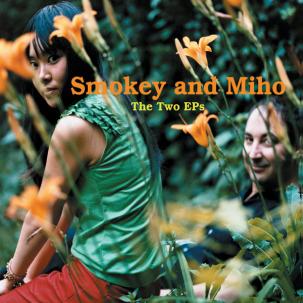 Along with the five Baden Powell songs from the Tempo De Amor EP, this 10-song CD also includes the 2002 self-titled Smokey & Miho EP, with "Nzage," a 1965 Angolan tune by Ngola Ritmos, and four original Smokey & Miho compositions, sung in both English and Japanese.

Miho has also sung with The Beastie Boys, Handsome Boy Modeling School, Medeski Martin & Wood, and John Zorn. Most recently she was featured on the worldwide hit "19-2000" and four other songs by Gorillaz. Guitarist Smokey Hormel played on Tom Waits's Mule Variations, numerous albums by Beck and Johnny Cash, and has scored films for director David Lynch.

* Smokey And Miho have been featured on World Cafe, KCRW's Morning Becomes Eclectic and the Y Tu Mama Tambien soundtrack

* Knocked 'em dead at the Montreal and Newport Jazz Festivals