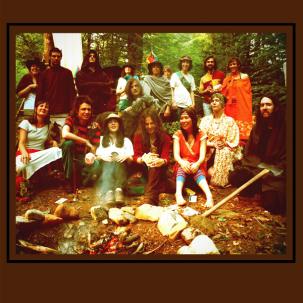 Feathers are an eight-piece collective musical ensemble, currently based between Northampton, Massachusetts and Brattleboro, Vermont.?! Formed in 2003 by Kyle and Kurt (first names only, please) at a Northampton record store, they were quickly joined by Shayna, Meara, Asa, Ruth, Greg and Jordan (more or less in that order).?! There are five primary songwriters, each with a unique style, and four singers.?! All eight musicians switch around on numerous instruments, loosely playing what can be described as psychedelic folk.?! Their debut album, now issued on CD for the first time via Gnomonsong, features simple strummed guitars, delightfully sweet harmonies, lysergic electric guitar, and tribal drumming, with a swirly folk vibe throughout.?! The group seems to draw inspiration from the same magical, natural forest elements that motivated Incredible String Band and Comus to release their own classic music in decades past.?!