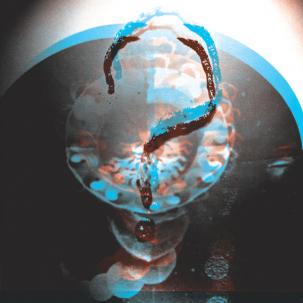 LP VERSION INCLUDES FREE DOWNLOAD COUPON!!! For this second full-length effort, Naked on the Vague eschew their tantalizingly sparse duo attack for a quartet line-up, and the results are as sensational as they are sinister. While the rickety, no-wave splat found on previous efforts had its appeal, the heft of a "proper" rhythm section has only helped Naked on the Vague delve deeper into the landscape of post-punk murk. Bleak, unrepentant, withering and droll, Heaps of Nothing is a 21st century codification of the gallows wit and mesmerizing otherworldliness of (Dub Housing-era) Pere Ubu, Primitive Calculators and Lemon Kittens. Shuttling mutant urbanity from past to present, Naked on the Vague is only too eager to confirm that the Earth isn't flat. Because Heaps of Nothing is here to flatten it.Look for the band on tour throughout their native Australia and, later in 2010, the US and possibly Europe.

Lucy Phelan and M.P. Hopkins hail from Sydney, Australia. Behind a basic framework of keyboard, bass, and vocals (and all manner of tinkered-with percussion) Naked on the Vague's distinct aggregate of sound calls to mind everything from SPK to Mars and beyond. Or, as they're fond of calling them in Philly, "the Death Star version of Times New Viking."  Originally released in 2007 on CD by the fearless Australian Dual Plover label, The Blood Pressure Sessions ventures into a darker realm than their debut 7-inch (also on Dual Plover) had erroneously suggested. Propelled by the sharp, rhythmic snare drum beat and anchored by thunderous, fuzzed bass-lines and stinging, swinging organ and synth fills, Phelan and Hopkins take turns rounding out the vocal duties, giving the whole of their sound a sonorous curtain of ecstatic foreboding. Betraying a gallows wit, the band refers to their music as "apocalyptic pop," which could be construed as both drowning and waving.  Coming from the label that brought the world both The Dead C and Shadow Ring, Naked On The Vague is a perfect fit in the Siltbreeze discography. Look for them at the upcoming SXSW and on tour throughout the US in the spring of 2008.