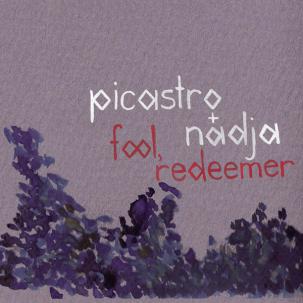 Fool, Redeemer is a semi-collaborative split release between Picastro and Nadja. Having toured together and shared a stage many times in the past half-decade, the two bands finally release something together. Nominally a split album, with side A featuring tracks by Picastro and side B a sidelong track by Nadja, Fool, Redeemer sees members of both groups contributing to each other’s songs. And a certain mutual influence seeped into the compositions—Picastro’s dark folk appears at the beginning of Nadja’s track “Venom,” and Nadja’s trademark drone / dirge tendencies lend a heavier, noisier edge to Picastro’s songs. Nadja’s Aidan Baker (guitars, vocals, woodwinds, drum machines) and Leah Buckareff (bass, accordion, vocals) alternately are based in Toronto, Canada, and Berlin, Germany. The project, originally formed in 2003, has variously been described as “ambient doom,” “dreamsludge,” and “metal-gaze,” and released numerous recordings on such labels as Alien8 Recordings, Hydrahead Records, Beta-Lactam Ring Records, Blocks Recording Club and their own fledgling label, Broken Spine Productions.  Toronto-based vocalist and multi-instrumentalist Liz Hysen’s Picastro has existed since 1997 in various forms with various players (including members of Final Fantasy and Rockets Red Glare). The group is currently active as a trio including Brandon Miguel Valdivia (drums, percussion) and Nick Storring (cello, guitars, woodwinds, electronics). Picastro’s stark, brooding, discordant songs draw on folk and psych traditions, noise and post-rock. The band has released four full-length albums on such labels as Pehr Records, Polyvinyl and Blocks Recording Club.