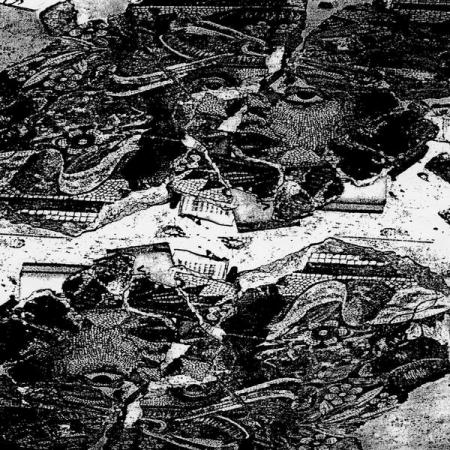 Spawned from the formidable Louisville, KY collective known as Black Velvet Fuckere (Valley Of The Ashes, Phantom Family Halo, Kark, etc.), Sapat resides as the centrifugal force in this Midwestern psychedelic madrigal set in the psychosexual backwaters of the mighty Ohio River. For the entirety of the '00 decade, members have kept busy collaborating with and/or massaging the egos of various and sundry avant-pontiffs such as Robert Fripp, Magik Markers, Dead Child (David Pajo's metal band. That's right, David Pajo!) and Eugene Chadbourne -- when not honing the orgone energy of Sapat.  The Fall of '06 saw their debut release, a seven-inch on BVF entitled Tongue-Tied & Staid that had a few astute bloggers comparing the action within to "aggressive blues a la Captain Beefheart and The Magic Band." However, for this self-titled full-length release, Sapat has opted for a different, more organic sonic waft. Acoustically packed to the gills, the octet effortlessly strums and blows breezy vibes, emitting kosmisch melodies and Teutonic ambience that channel -- Julian Cope-like -- past giants such as Limbus 4, Siloah and Lord Krishna Von Goloka (you know, the A-team of Krautrock). Once you launch into the group's spacey and entrancing, yet calming and soothing asteroid belt, you might mistake the Ozarks for the Alps if you're not careful. And who could blame you? You're way up there and the air's thin; hallucinating's a must.