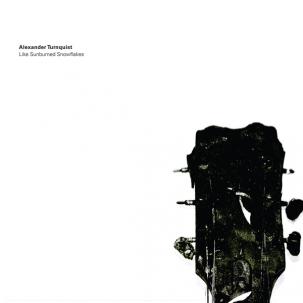 The limited-edition Like Sunburned Snowflakes features five tracks in Alexander Turnquist’s unique style, using only plucked harmonics on a 12-string. With this seemingly narrow palate of sounds, the guitarist crafts sparkling waves of notes, employing the minimalist sensibilities that have informed his more recent work (e.g. his 2011 album Hallway of Mirrors) on a smaller scale. Arguably “new age,” the EP is not drifty or ambient—it’s more Reich and Riley than Windham Hill. The harmonics are frequently struck hard and in complex patterns.  Like Sunburned Snowflakes is another intriguing experiment from one of the most forward thinking solo players out there, whose recordings are completely devoid of the folk / Americana spirit so imbued in the genre.  “My fascination with harmonics on an acoustic guitar started as a child; from before I ever started playing I was drawn towards the warm sounds that I heard people play in brief moments. So I’ve had the idea for a very long time, that idea being to make an entire solo guitar recording just employing my left hand to the harmonics up and down the neck and alternating picking patterns with the right. I feel like it gives the instrument a tonal color that doesn’t necessarily feel at first listen like a 12-string acoustic guitar. —Alexander Turnquist 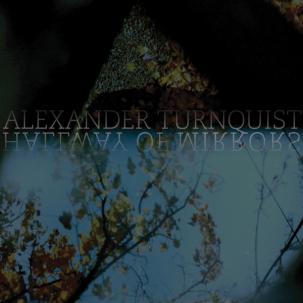 On Hallway of Mirrors, young New York-based guitarist / composer Alexander Turnquist continues to forge his own radical style: a resonant and enveloping acoustic sound, full of beautiful harmonic overtone interplay, all instruments sustained.  Turnquist’s guitar approach revolves around a prodigious right-hand technique and a minimalist slant on composition that separates him from the retro-styling endemic to most current acoustic guitar music. Hallway of Mirrors uses much of the tonal palate from its precursor As the Twilight Crane Dreams in Color—dense twelve-string finger-picking with vibraphone and piano carrying much of the melody. On Hallway, the pieces are more concise with the added sweep of Christopher Tignor’s elegant violin punctuating Turnquist’s harmonics-laden forward motion and Matthew O’Koren’s immaculate vibraphone (played with both mallets and bow). The additional instrumentation, inspired in part by Steve Reich’s “Music for Eighteen Musicians,” provides an added focus in the music, signifying each change in tone and timbre.  Recorded on analog tape using traditional automatic double-tracking stereo mix techniques by engineers Henry Hirsch and Bram Tobey, the sound has an elegant soft focus that highlights Turnquist’s strong and sharp performance. The centerpiece of the album, the sixteen-minute “Waiting at the Departure Gate,” makes a sly nod in tribute to fellow VHF artist Jack Rose, who all too briefly explored similar techniques on his classic “Black Pearls.” A truly uplifting and emotional listening experience. 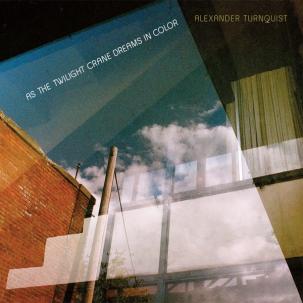 As The Twilight Crane Dreams In Color

As the Twilight Crane Dreams in Color is the second full-length from New York-based guitarist Alexander Turnquist, who defies expectations with a set of hypnotic epics that owe more to classic minimalism than current notions of solo guitar.  Forgoing most of the extended techniques of his debut, Turnquist lays down a thick blanket of 12-string that sets up persistent, loop-like patterns in the music. Simple and lovely strings, piano, and percussion provide the melody, carrying most of the movement in the pieces. Turnquist uses extraordinary control and restraint--the orchestrations are as reductionist as possible, with no cringe-inducing "string drama" or unnecessary virtuosity. An almost-monomaniacal tremolo thrum of the guitar dominates the album, but there is a lengthy ambient breakdown that occurs mid-way through the 18-minute "The REM Cycle - Dream Phase" that is a thing of elliptical and drifting beauty.  As the Twilight Crane Dreams in Color is a bold statement even in the context of the frequent micro-parsing of styles in the sub-underground--there's really not much else out there like it. 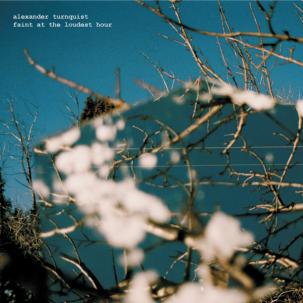 Faint At The Loudest Hour

Faint at the Loudest Hour is the astonishing solo debut by guitarist Alexander Turnquist, part of a young generation of guitar players who have taken their incredible virtuosity and turned it into something actually worth listening to. Like James Blackshaw, Jack Rose, Glenn Jones, et al., this could roughly be described as “raga” guitar, with its long, modal compositions and hypnotic overtone play. Unlike most of his peers, however, Turnquist employs a variety of extended techniques à la Hans Reichel, grappling the strings with both hands and using a variety of approaches and attacks on both the steel and wood. There’s also a distinct lack of audible “roots” influence here, with Turnquist sidestepping the Fahey-isms that dominate so much current acoustic guitar music. Along with the six- and twelve-string acoustics, Turnquist makes subtle use of electronic textures, such as the surprising Fennesz-like dissolve that occurs midway through “Amongst a Swarm of Hummingbirds.”  Faint at the Loudest Hour was recorded by Scott Solter (Mountain Goats, Liam Singer, many others) with cinematic depth and detail.