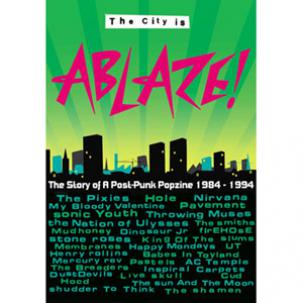 Happy Happy Birthday To Me / Ablaze

Ablaze fanzine was published in Manchester and Leeds in the late eighties and early nineties by Karren Ablaze!. The best bits of this notorious and outspokenly passionately zine are now available in book format. Alongside hundreds of zine pages, The City is Ablaze features new writings by Karren and other members of the Ablaze! team, as well as interviews with other zine writers, essays by DIY cultural commentators, a re-examination of the Riot Grrrl movement, and an epilogue by Gary Jarman (the Cribs). The 320 page A4 book covers other zines that Karren produced in Manchester and Leeds between 1984 and 1994, capturing an era where DIY was de rigueur and indie actually meant something. You'll be able to read original interviews with the following bands (in chronological order). Eyeless in Gaza, the Membranes, the Stone Roses, the Inca Babies, Tools You Can Trust, the Bodines, Inspiral Carpets, the Pastels, the Janitors, Happy Mondays, King of the Slums, the Dust Devils, the Shamen, Cud, Sonic Youth, Dinosaur Jr, the Pixies, Throwing Muses, the Sundays, Thrilled Skinny, Rapeman, UT, Dog Faced Hermans, Edsel Auctioneer, Mudhoney, AC Temple, fIREHOSE, Band of Susans, Henry Rollins, Live Skull, Kilgore Trout, the Sun and the Moon, the Breeders, Happy Flowers, Silverfish, the Keatons, the Stretchheads, Pregnant Neck, Mayomberos Alive, Fluff, Archbishop Kebab, Nirvana, Pale Saints, Mercury Rev, The Heart Throbs, Babes in Toyland, American Music Club, Hole, Pavement, My Bloody Valentine, Shudder to Think, the Wedding Present, Leatherface, Nation of Ulysses, Tsunami, Poster Children, Sugar, Moonshake, Hood, Polvo, Pavement, The book also includes irate letters from Morrissey and Thurston Moore. The City is Ablaze reads like a musical history of the late eighties and early nineties, a history that could only be obtained by surfing the sliproads, sneaking backstage at a thousand shows, sleeping on strangers' floors and living to type up the tales of the sounds that defined an era.