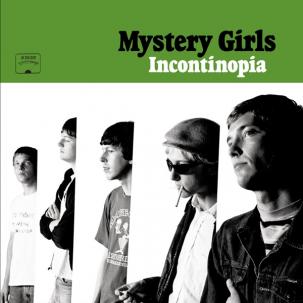 Green Bay, Wisconsin's Mystery Girls were mere teenagers when they started out. Now in their early/mid-20s, the boys (er, Girls) have delivered their most cohesive work yet on their third album, Incontinopia. It's unclear what Incontinopia means but it's a good bet that copious amounts of marijuana smoke were involved in choosing it.  Recorded a couple years ago, Incontinopia has sat on the shelf while the band relocated and readjusted. Like a fine wine, Incontinopia has aged beautifully--its sound is rich, full, and earthy. Adding a dose of psych weirdness to their patented garage-punk-R&B sound has resulted in the band's finest moment. Vocalist Casey Grajek's raw-throated vocals have never sounded more powerful and guitarists Jordan Davis and Mount Mathieu D'Congo's dueling solos harken back to the MC5 and Yardbirds. This is great stuff that sounds immediately classic.  Culled from several sessions and stacks of recording tape, Incontinopia was assembled by bassist/drummer Mike Zink, whose abstract approach to editing has given the album a weirdness that brings to mind Head-era Monkees colliding with Funhouse-era Stooges. Yep, Nesmith meets Asheton--it's that good!  The Mystery Girls have laid low the past couple of years but upon the release of Incontinopia that will change. The band plans on a full US tour to be followed up by a swing through Western Europe. Be sure to catch them when they hit your town--bands this good don't come around very often. 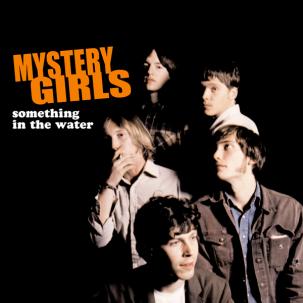 Something In The Water

***There must be an explanation for at least ten outstanding new, young rock’n’roll bands all currently working their mojos in Green Bay, Wisconsin. Definitely at the head of the class, The Mystery Girls play sloppy, rambunctious, blues-infused… okay, let’s just say it: they play garage rock. For a musical style that has been around for approximately forty years and attempted by every social reject who ever picked up a guitar, very few do it well. The Mystery Girls do it amazing. Something In The Water is a timeless blast that lays waste to the current crop championed by overseas porn mags such as NME. This is the real dope, daddy — Midwestern kids, some still not old enough to drink legally, who have nothing better to do than get high and study the riffs and nuances of every ’60s and ’70s garage punk album ever recorded and try to master them. The Mystery Girls are so masterful it’s almost scary. A lot of bands might claim to be inspired by the MC5 and Brian Jones-era Stones, but The Mystery Girls genuinely sound like a legitimate cross between the two. Their debut album on Trickknee Records last year was an instant classic. Extensive touring of the US has earned a legion of young fans and proved them to be a real force in the world of underground rock. Something In The Water was recorded at the fashionable Ghetto Recorders in Detroit by the producer of the moment Jim Diamond.  •...

Circles In The Sand

***Knock-out new 7" from these Green Bay whippersnappers who splatter like the early Yardbirds if they'd hallucinated the future through the eyes of the Stooges & Pagans while guzzling, smoking and snorting everything in sight at the Marquee club just before 6am closing. And they're barely of drinking age. Not yer typical teenage fun & games either, these guys have depth and soul & song-writing prowess that few bands reach at any age. Their debut album (self-titled on Trickknee Records) from last year is one of the strongest debuts in eons. Their sophomore album will be out in early 2004 on In The Red. This band is one in a million folks.